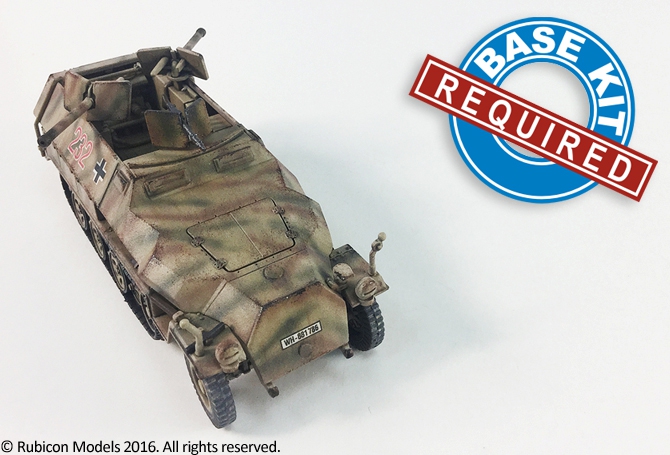 Unfortunately this item is out of stock at the moment

The SdKfz 251/16 (based on the SdKfz 251/1) was fitted with two flame projectors and initially a rear mounted flamethrower (Ausf C only), detachable but still connected to the vehicle, to be operated by dismounted infantry.  This was in addition to the standard forward machine gun mount.
Six SdKfz 251/16 Flammpanzerwagens were authorised for issue to each Panzergrenadier regiment or in the Pioneer battalion.  Though vulnerable, they were used very successfully at night to quickly attack enemy infantry who had just captured German trenches, hitting the enemy before they could consolidate and bring up the heavy weapons that would make them much costlier to defeat later.
EXPANSION KIT ONLY - Requires SdKfz 251 BASE KIT* to complete full model.
* Base Kit includes one of the following:
280031 SdKfz 251/1 Ausf C
280018 SdKfz 251/1 Ausf D
Product Highlight:
- Add-on product for our SdKfz 251 base kits
- Two build options as an SdKfz 251/16 Ausf C or D
- Fullly detailed interior
- Include four figures - two with heat resistant face mask and two without
- The two figures without face mask can be used as normal panzer crew for other vehicles
Build Choices:
- SdKfz 251/16 Ausf C
- SdKfz 251/16 Ausf D
Product Code: 280040
Number of Parts: 25 pieces / single sprue
AVAILABLE SOON