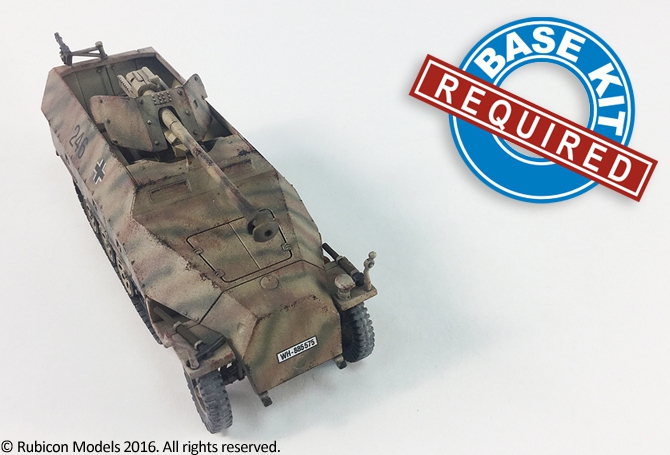 The SdKfz 251/22 (based on the SdKfz 251/1), simply known as the “Pakwagen” was one of the best AT support vehicles, fitted with a high velocity PaK 40 L/46 or L/48.  These were heavily used as the operations turned into defensive actions, from Italy to Normandy and the Eastern front.  The range of the gun allowed the vehicle to be relatively safe from well camouflaged and pre-arranged positions.  However, the chassis was never designed to cope with the extra weight nor the blast shock and recoil, which triggered many mechanical breakdowns and excessive structural fatigue.  Nevertheless, in Dec 44, Hitler gave this version top priority.  The mount comprised two H shaped beams welded to the floor, on the middle of the rear compartment.  The shield was modified with trimmed angles, and the platform was made of flat triangular plates holding in place the original gun cradle.  The driver sat on the left, aiming with the standard PaK 40 optics.  Traverse was 18° and 19° and elevation ranged from -3° to +22°.  22 rounds (HE and AP) were stored.  Usually the crews carried extra rounds in loose containers, stored wherever possible.  Production figures are elusive, perhaps 1,200 vehicles using Ausf D chassis.